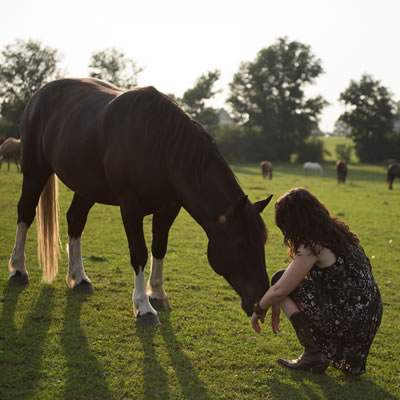 When it comes to certain aspects of healing trauma, this makes sense.

Self-regulation, the renegotiation of self-protective responses, the release of armouring, the resolution of body memory, the re-integration of inner parts, and the repair of attachment ruptures can all benefit from the attunement, guidance and co-regulation of another nervous system. Resilience can be cultivated.

Sarah is an attachment and body-oriented psychotherapist who combines a depth and breadth of knowledge of trauma therapy approaches with a warm, engaging nature and capacity to sit with the complexity of her clients’ experiences. Through felt sense attunement, intuition and skill, she aims to foster safety, curiosity, a willingness to explore, and trust in one’s innate ability to heal.

Sarah’s dedication to trauma-informed, anti-racist and anti-oppressive practice means that she will be transparent about her observations and discuss different therapeutic approaches that could be useful in reaching your goals. Your voice and right to informed choice are paramount. She also actively works at recognizing her privilege and and examining old, learned, hidden biases, stereotypes, prejudices and discriminations that stem from white supremacy, cis-heteronormativity, and other forms of toxic socialization.

Therapy is not something that is done to you, but a process that is embarked on together, and your voice is important every step of the way. 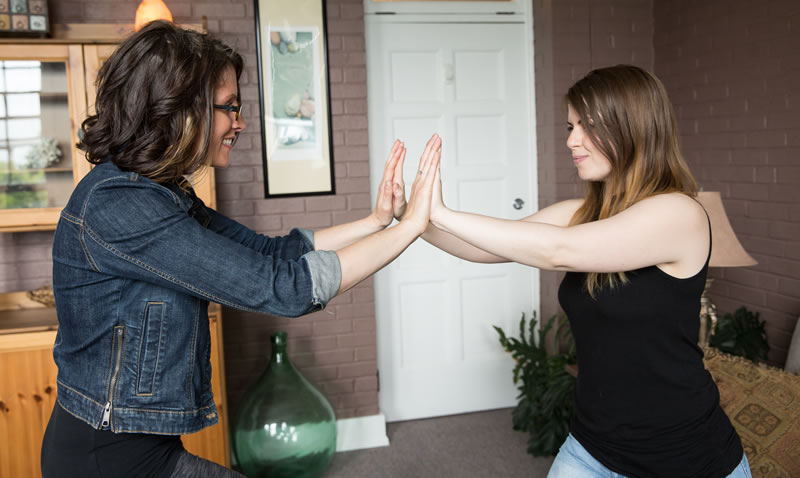 Commitment to trauma-informed and trauma-focused care.

While Sarah is trained in traditional talk therapy, the options don’t stop there. She integrates a variety of top down and bottom up approaches in her work as well. Therapy can address many levels, including what is happening with the body-mind, relationship with self and others, personality, behaviour, communication, beliefs, systemic issues, and more. This means that therapy won’t be a one-size fits all experience and that her approach will be tailored to your unique needs and circumstances.

Sarah’s flexible, approachable style is based on her clients’ histories, nervous system patterns, body memory responses, attachment dynamics, personality structure and traits, life themes, unmet needs, culture, and spirituality. Perceptive, compassionate and understanding, she generally works from the periphery inward to respect and grow the window of tolerance, while also recognizing the value of appropriately-timed challenges and observations that cut straight to the heart of the matter.

Sarah accompanies her clients as a fellow human who values post-traumatic growth.

Click on the following links to learn more about the specific therapies Sarah offers and her areas of focus and interest.

Unpacking her invisible knapsack of privilege

Sarah is committed to anti-racism and anti-oppressive practice in other forms and tries her best to foster a safe space that celebrates diversity, acknowledges different paradigms and perspectives, and respects differences of opinion provided they don’t disrespect the human rights of others. Sarah is honoured to lend her support as an open-hearted ally and recognizes that allyship is an uncomfortable road that requires constant self-examination from a place of humility. She recognizes she will get it wrong at times, and is willing to learn.

She works with clients from a variety of cultures, ethnicities, religions/faiths, abilities, sexual orientations, body appearances, and gender expressions. Her early career experiences with seniors in long-term care, tutoring neurodivergent children, and helping foreign trained professionals, immigrants and refugees prior to becoming a therapist also inform her current work.

Sarah’s life experiences and background allow her to relate to individuals from many walks of life. She resonates with people who belong to many categories and yet don’t fit any one perfectly, remaining somewhat of an outsider with insider insights.

Sarah’s ethnic history is largely of European descent with documented traces of Indigenous ancestry via her French ancestors who came to Canada in the 1600s. Her German ancestors arrived in the early 1800s. Fluent in French and English, her mixed cultural and linguistic background was a target of marginalization and shaming by her peers in the small French Canadian town where she grew up. Having to switch personas to fit in was required, though she experienced bullying, ridicule, microaggressions, name-shaming, and rejection on a regular basis just the same for many of her formative years. She has first-hand experience with the conflicts between Francophones and Anglophones and is intimately aware of the dynamics involved in living and working in communities where French is a linguistic minority.

Struggling to belong and feeling unsafe with others is a familiar experience for her. Although being White did not spare her from being ostracized for cultural and linguistic reasons while younger, she recognizes the overall privilege that comes from her skin tone that allows her to escape the additional generations of violence and racial discrimination faced by Indigenous people and persons of colour.

She has been interested in cultures, languages and genealogy since she was young, and began taking an interest in First Nations and Métis history, traditions, and colonial trauma when she was a pre-teen. To learn more about this part of her ancestry, she took coursework that focused on colonial trauma taught by a Métis professor Honoré France, met with Elders Dan and Mary Lou Smoke over the course of a year to learn more about blood memory and traditions, and took part in different Indigenous ceremonies.

Similarly, she took a year-long course in German, though this was harder to retain without the benefit of full immersion to gain fluency. Like many Canadians of German descent, her family lost the language following WWII as a result of cultural shame.

She has lived in Québec, Ontario and British Columbia, in remote, rural, and moderate-sized settlements, towns and cities.

Sarah’s experiences with spirituality are varied. Raised in a joint Catholic-Protestant home, she has attended mass as well as a variety of other services, including United, Pentecostal, modern Mennonite and non-denominational community churches. Baptized as an infant and confirmed as a child, she chose to be baptized again as a young adult.

She also experienced first-hand the existential dread, anxiety, panic, and mixed emotions tied into leaving a fundamentalist faith community that relied on indoctrination. She has since explored other forms of spirituality, including left-wing Christianity, Buddhist principles, yoga and mindfulness meditation, and indigenous traditions and shamanic concepts (while being mindful of cultural appropriation).

As a result, she has the capacity to relate to individuals for whom formal religion is an important resource, as well as individuals who find meaning in other forms of spirituality or none at all. She also understands the complexities involved in leaving toxic religiosity or cult-like organizations and healing from religious or spiritual trauma.

She currently identifies as agnostic, intuitive, and connected to messages from animals and universal energy that defies rational explanation (in spite of being a huge science nerd!).

Sarah uses the pronouns she/elle, and has friends, family members and clients who span the range of sexual and gender diversity, from traditionally cis-gendered people to folks who do not fit any particular category or whose orientation and expression are in transition. She has supported people through the coming out process, including when this has occurred within the complicated confines of right-wing conservatism. 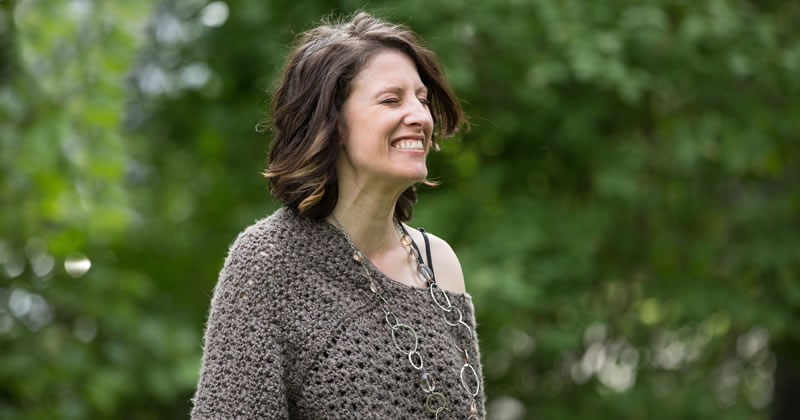 It’s not what’s wrong with you, it’s what’s happened to you.

Her compassion for her clients’ needs, experiences and the things they’ve had to carry comes as a result of her own healing work. Navigating intergenerational patterns, early developmental imprints, as well as relationships with individuals with personality disordered traits, fragmentation, and avoidant and disorganized attachment styles, has given her a deep respect for the complexity that comes from healing from trauma and shame.

She has also experienced various other forms of adversity, including bullying, car accidents, surgeries, a fall from a horse, pain patterns, medical issues, harassment, sexual assault, grief and loss, and body dysmorphia symptoms. As a result of her ancestors’ experiences, she has an appreciation for the impact of military service, disability, alcoholism, poverty, infant loss, parental loss in childhood, pregnancy and birth-related complications, foster care, and colonial trauma.

While Sarah rarely discusses her personal history in sessions and uses self-disclosure sparingly with the goal of normalizing, minimizing shame, and building rapport, sharing her background here is done with the intention of helping prospective clients get a sense of who she is as an individual. 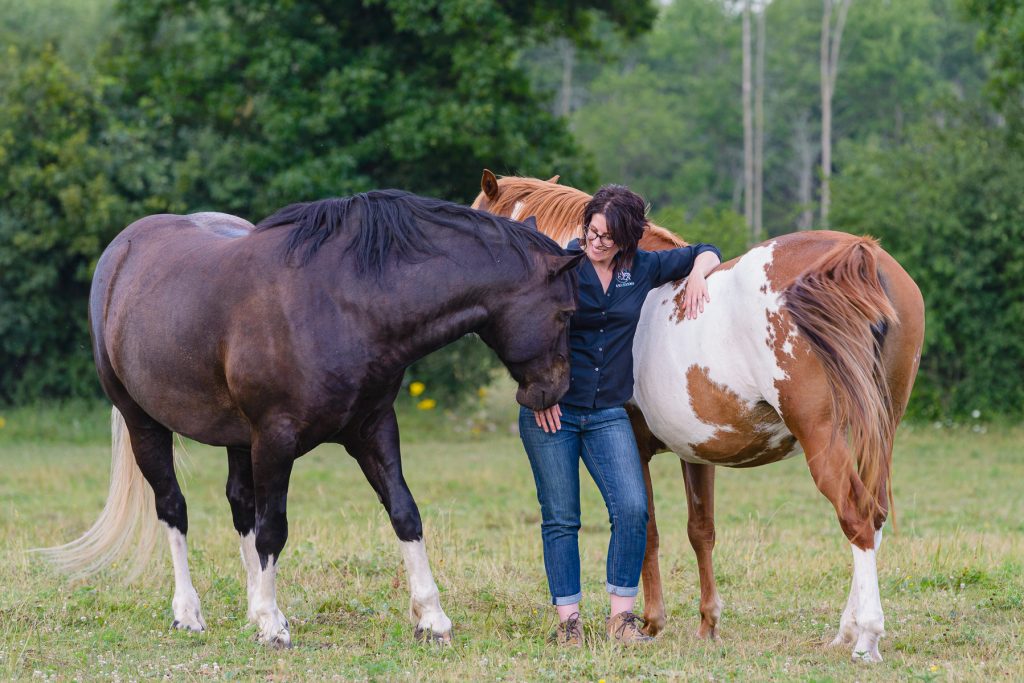 Social justice for all species

Sarah is cognizant of the power and oppression that are inherent in anthropocentrism and speciesism, and the impact that humans have had on other living beings and the environment as a whole. She has been eco-conscious and sensitive to the suffering and plights of other creatures at the hands of humans since she was a young child, and has allowed this passion to drive the development of EQUUSOMA® Horse-Human Trauma Recovery as a paradigm shift and training for a variety of professional contexts (where either the human or the equine are the primary “client”, or both). She has also co-founded Equuscience™ with Dr. Steve Peters, which has a similar intention in terms of helping promote this paradigm shift to a general audience. She supports safety, consent, choice, voice and empowerment for all, and attempts where possible to do no harm, reduce harm, and – at best – do good in relation to others and the world in which we all live.

Disclaimer: The material included on this site is intended for informational purposes only and in no way is meant to substitute the provision of psychotherapy provided by a qualified professional.